Pseudoscience in the European food regulations

Food production is the main limitation for development. Nowadays Europe imports about 35% of the food that requires and this tendency is increasing in recent years.EU agricultural policy is strongly supporting practices such as organic farming and impeding the development of alternatives such as biotechnology based agriculture, which has proven to be successful in other regions of the world such as the USA, the Americas or Asia. The main concern that I will expose in my talk is that this politics is lacking a scientific basis and is based in superstition and pseudoscience, and the results may be catastrophic.

It is a wise politics to give official support to organic production? Although the consumption of organic food is increasing in Europe and other parts of the world, overall is a minor option accounting for less than 6%of the total agricultural land in Europe and less than 1% worldwide. Most consumers think that organic food has better nutritional value or that its production is more sustainable but to date there is no scientific evidence confirming these assumptions. In addition, productivity is very low and as consequence the price is higher. Which is the origin of the problem? A close analysis of the European Council regulations on organic food production gives some hints on the roots of the problem. Pseudoscience is present throughout the regulations, either indirectly or explicitly.

Here are some examples of the explicit mention to pseudoscience in some European regulations:

Spirituality in the European regulations for food production

Organic regulations is based in the principle that all that you can use for agriculture must be of natural origin. This goes against our basic knowledge of chemistry, where the properties of any material depend on its composition, not in its origin. But there are some explicit mentions that have to do with pseudoscience For instance in chapter 2, article 12 (plant production rules) (c) of the Council Regulation (EC) No 834/2007 of 28 June 2007 on organic production and labelling of organic products, which repeals regulation (EEC) No 2092/91, is stated that “the use of biodynamic preparations is allowed”. Biodynamic agriculture is a method that for many consumers is similar to organic farming, but in fact is much older. Biodynamic agriculture is based on a series of conferences given in 1924 by Rudolf Steiner. Biodynamic agriculture is focused on spiritual and mystical perspectives, based on the anthroposophy movement, which was also an invention of Steiner, originated as a segregation of the theosophy movement, an esoteric philosophy created by Helena Petrovna Blavatsky in 1875. Biodynamic practices are a compendium of superstition and beliefs, with no scientific support or demonstration, with a strong presence of oriental spirituality and astrology. For biodynamic believers the aerial part of the plants are regulated by several planets and the roots by different planets. Does this work? The very few available studies which compare biodynamic production with conventional productions have failed to find any improvement at any level (nutritional quality, productivity, food security). In fact, the assumptions of Steiner were based on spiritualistic inspirations but not on any agronomical experimental programme or anything similar. As an example of this lack of scientific basis we can read the formulation for some biodynamic preparations. For instance, Number 503 consists of “cutting chamomile flowers before 10 a.m., drying them and placing them into a fresh cow’s intestine, tying both sides and burying them in the soil during Autumn in an unglazed earthen jar and digging it up in early spring”. Or the biodynamic preparation number 505, which consists of “grinding oak bark into powder in Autumn and then placing it in a cow or sheep skull and then burying it in a swamp or stream. Another practice includes the use of animal horns filled with manure”. It is obvious that these practices are not related to science-based agriculture or food production, but to superstition. Another concern about the explicit inclusion of biodynamic preparations in the European regulation is the fact that biodynamic certification depends mainly on a single company, Demeter, related to the theosophy movement, that is, the group created by Steiner himself and which includes other well known companies such as Triodos Bank and the cosmetics company Weleda, but biodynamics is not the only pseudoscience present in the regulations.

Homeopathy in the European regulations for food production

In articles 14 and 15 from the 2007 previously mentioned regulation it is written that: (ii) “disease shall be treated immediately to avoid suffering of the animal; chemically synthesised allopathic veterinary medicinal products including antibiotics may be used where necessary and under strict conditions, when the use of phytotherapeutic, homeopathic and other products is inappropriate.” In addition, the Commission Implementing Regulation (EU) Number 354/2014 of 8 April 2014 point (9) says: “In the amended wording of Article 24(2) of Regulation (EC) No 889/2008, ‘homeopathic products’ had erroneously been omitted. Since those products appeared in that provision before the amendment by Implementing Regulation (EU) No 505/2012, they need to be reinserted.”, and point (1) of Article 24 states that “in Article 24, paragraph 2 is replaced by the following: ‘2.Phytotherapeutic and homeopathic products, trace elements and products listed in Section 1 of Annex V and in Section 3 of Annex VI shall be used in preference to chemically-synthesised allopathic veterinary treatment or antibiotics, provided that their therapeutic effect is effective for the species of animal, and the condition for which the treatment is intended.”

The explicit mention of homeopathy in different regulations is something that strengthens the idea of the lack of scientific evidence supporting many European regulations. Homeopathy is based on the ideas of Samuel Hähnemann, a German doctor who died in 1843. Hähnemann developed several principles based in its own experience. The homeopathy principles determine that “like cures like” and that the more diluted a remedy, the more effective. The level of dilution used in most homeopathic preparations usually continues well past the Avogadro number, that is, a 30CH homeopathic dilution is less than a molecule with a sphere that has the size of the solar system. Therefore the final product is just water, which usually is sprayed on sugar pills. Homeopathy is a nonsense for chemistry and lacks any biological plausibility. None of the principles or assumptions postulated by Hähnemann in his book “Organon der rationellen Heilkunde” have been confirmed by science so far. There are scarce addressing positive results by using homeopathy. Systematic reviews have not provide any evidence in favour of homeopathy, either in medicine, veterinary science nor farming. There is a clear fact against the validity of homeopathy. There have passed 200 hundred years since the works of Hähnemann and there is still no homeopathic treatment which is in official use in medicine, veterinary agronomy. So the regulation for organic food production recommends the use of homeopathy but there is no scientific evidence that supports this claim. Homeopathy is plain pseudoscience.

Is the European ban on GMO based on scientific evidence

Agronomical politics in Europe has a strong focus in promoting organic agriculture, buy on the other hand the use of crops based on genetically modified organisms (GMO) is strongly impaired. So far there is only one crop which is in commercial production on European soil the maize (MON810), but almost 80, including other varieties of maize, sugar beet, cotton, soy beans and rapeseed. Some other crops, many of them developed in Europe are under evaluation, but many of them, even though they have a positive evaluation from EFSA, are not authorized. This is strongly impairing the development and progression of European agriculture and creates many paradoxal situations. For instance, Europe spends millions of euros analysing if food imports contains any GMO not authorized or lacking the label that indicates that contains GMO, but any European travelling to USA will likely eat food containing some of these unlabelled GMO. This situation has happened in the last twenty years, without any reported problem. In opposition to organic production, farmers opting for GMO have no access to any public subsidy, and even though, the production of GMO in Europe (cultivated mainly in Spain) is growing.

The indirect, or direct, support to antiGMO campaigners by the EU has other deleterious effects, not only in the economy. There are more than 40 attacks to experimental fields reported, causing serious harm to scientific installations and having deleterious effects on science projects, many of them funded by the EU itself. The most dramatic case was in June when a member of the GMO panel of the EFSA received an explosive letter. As the French philosopher Voltaire said “Those who can make you believe absurdities, can make you commit atrocities”. 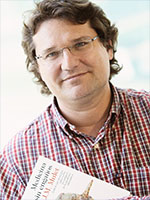